figures moving - shoulders arms legs up down left in all the directions they push and shove and hit and / the club is full and / of people persons humans figures people person humans figures . (how did you get here?) flashing lights going in all directions purple green red blue the music goes trough the chest , somewhat nauseating as every time the sound machine goes it pushes you a little, like the people do like the persons like the figures do, it pushes you back and yet, you keep dancing, it's fine it's okay

the MC comes up to the stage, the ceremony will begin now / the sound is still so loud you cant hear however , as he finishes his intro, one dreaded sound comes trough your ear - your name. He said your name / as you try to run away the two strong muscular hot figures next to you grab you, you are being dragged trough the ground ; can you fight and yet - no time , you are already being nailed to the floor . giant metal spikes being driven trough your handsfeet and as much as you scream / there is nothing to do/ as much as you scream , its still over

the hooded figure towers above you as you hear the crowd chant louder and louder / as the figure pulls out something glowing, something with a shine, long and sharp and [[IT CANT BE HAPPENING ]] not to you , you know? usually it happens to everyone else, but not you, the ceremony has begun and not in the crowd but instead you are located on a stage , / on a board as you scream nothing comes out the lights are still moving /

beams of neons and protons shining into your fieldofview - swords cutting trough darkness as the faces are obscured, all that is to be seen is the masses of shadow in front of you / shouting screaming in joy as the GLOWING THING RIPS YOUR CHEST OPEN , ITS YOU - the cold metallic body executing a succinct movement from the adam's apple to the abdomen and as the ribcage is pulled apart a glowing gem is revealed / breathing pumping ,. bthump thump, thump thump , thump thump, thump thump , she clasps it, grabs it and seizes it - a sort of expropriation , as the adventurer takes a golden statue from a stand the MC rips a gem out of your body , red rain staining and dripping and shooting cheers as the heart is being taken as you watch - the next stage must begin, and you know what's coming

as you watch with horror , the heart is being thrown in a cylindrical metallic chamber , as if it was any other item of clothing, the door is slammed shut and / spinning wheel / beepbeepbeepbeep the hand decoding the console as the sting of words is displayed - HEAVY DUTY HEAVY HIGH - it presses a button , PLAY / start? triangle GO - THE CEREMONY HAS BEGUN / thump thump . it hits the wall thump and thump thump again , dragged by the centrifuge thump thump the beating gem / thump thump following the wings thump ripping , jets of liquid tearing as it follows an orbit / revolving around the sun a movement has been created thump as comes the day night follows , disintegrating into a red mist /melding with a sort of liquid red clear - red pink and BEEP BEEP BEEP the door is opened and as you watch the remaining sludge of your heart simmering , they pick it up , once a gem now cut, perfected into an horror beyond comprehension, the ex-heart is presented to the crowd as they go fucking apeshit, it is the latest advancement, the avant-garde of modern art , and you were there to see it. 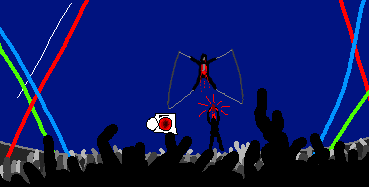