So what is (a)"movement" really? put some thought into it, it is when something that was is displaced in another location, while my fist was on my waist it is now on your face, and while yesterday the boss was in the office he is now in a grave - things move, it is a perpetual flow of things, A -> B - Cybernetic systems clogging the fuckign toilet again . whjo the fuck put towards a new socialism by paul cockshott in here // it is stopping movement you see, as the water moves from the tank into the bowl and into the drain, towards a new socialism by paul cockshott is actively blocking the way, it is even creating it's own counter-movement, becoming soft as the paper soaks with water and molding itself into the whole where your shit goes, creating a unity between shit, piss and book, a new whole that was never seen before (or was it?) in today's exploration, we will explore this 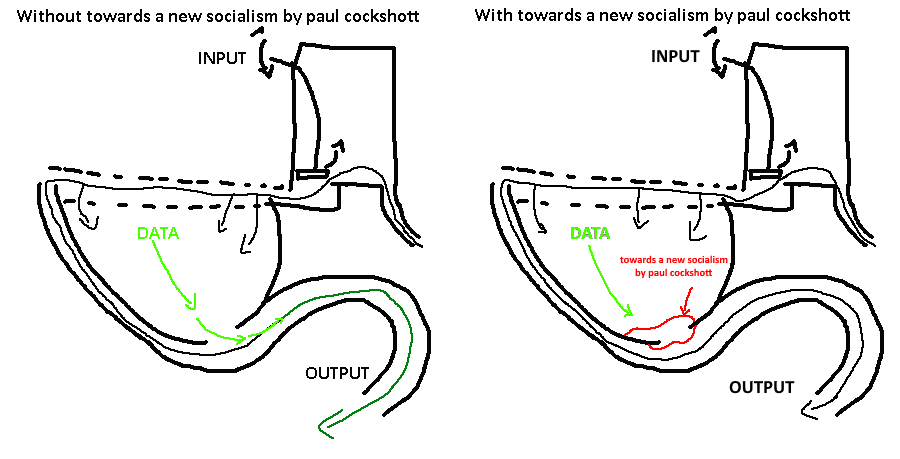 the shark is an interesting model for a rev-olution as it cannot stop, as long as it goes forwards and kills, the shark-machine is fine but if ever it is to stop, the gears will cease, the shark will stop breathing and fucking die - in the same vain, the revolutionary must keep moving forwards, as long as it sheds it's sckin, as long as it runs, the archetype of the revolutionary keeps going,, however the instant it ceases a flame dies - a revolutionary node now exctinct leaves behind a bunch of shit , a rotting corpse smelling like a shadow of what was - a faint odor of fruit in a mound of shit covered in leadpaint / can you salvage it - no, it is too late, as you are not a necromancer, even the most skilled alchemists such as Mao tried to re-vive a corpse (the PRC) , however failed, the spell of the cultural revolution was cast little too late.

What happens when the earth stops revolving? it dies ,gets lost into deep space- -freezing, slow disintegration and collapse - reproduce this framework to what is observed, once one stops moving , it simply dies, when your heart stops moving (in - out - in - out) it ceases pumping blood and leads to a total shutdown / when the sun stops throwing heat (out - out - out - out), life ceases immediately -there is nothing new coming for you / once the revolutionary organ(s) stop moving - ( out - out - in - out - out - in ) the flame gets smothered , and the entropy of power slowly seeps back , from one to two to three /, the monarch is back -

WHAT CAN I DO ? ? simple , dance - move , .the street is yours after all, puke on your neighbor, swear in formal letters/. as the revolutionary organ (heart, sun, shark, etc.) is a hand made machine, it must be moved by hand, it is analog in a sort of twisted way ,as you push a lever or throw a suit out the window,, the cop is hemmoraging from the head like the fucker that he was. simply , if he did not want to die, he simply should have been born an arch-angel - watchful over a bunch of marxoid theologians squabbling over the canon, PURGED , PURGED , PURGED. in a world revolving-evolving-volving you are in a way divine ,

a revolution is an assemblage of revolutionary organs, a machine coupled with another and another , a body smearing its fluids on a cavnas much like an all welcome sunday rave, giant fucking speakers on a stage , the avangarde party has formed - singing while words blast on the crowd . is there a crowd? people climb on stage and throw (up)you out .they scream a deafening arrangement of babblings - oh god this is so hot - people are fucking to death and killing eachother /v the scene is simply a sight to behold , corpses rotting , blood painting red, people with their guts ripped out doing dance offs, acéphallic prostitutes and hobos in harmony - this has been going on for a week and yet, this is the beggining of the tale that is being told - the day after:

a bunch of degenerates walk out of the hangar , leaving behind at least a hundred dead / now is not the time to mourn, the party has just started - RIOT - during the avantguard a platform was formulated:

THIS PLATFORM WAS INGENUOUSLY FORMULATED AND PRESENTED BY THE DEGENERATES AT THE AVANTGUARD PARTY - flowing into the streets as tans was dislodged faggots are drinking and dancing in the street now, still hearing the faint noise of the jungle music blasting from the rave-hangar, others are robbing stores and burning produce in the public place. it is an iconoclast movement, where all old is destroyed in place of nothing / a republic of zer0 produce and thousand wastes has been established
- TO BE CONTINUED (?)_